How to work out the percentage scores in duplicate bridge

If you take part in duplicate bridge competitions, either at a club or online, you will find each hand you play is awarded a percentage score. This isn’t directly related to the number of points you scored, but tells you how well you did in comparison with the other people who played the same hand.

It isn’t hard to work out the percentages.

* First, deduct one from the number of pairs playing the hand.

* Next award each pair points according to their position on the results table. Starting with the number you worked about above and decreasing by one for each pair. The bottom pair receives 0 points.

– For example: In the hand with 7 players, the top scoring pair would receive 6 points, the next pair 5 points, then 4 points, 3 points, 2 points and 1 point. The bottom pair receiving 0 points

* If more than one pair achieve the same score then the points are added up and divided by the number of players.

* Once the points have been awarded these are converted to percentages. This is easily done by multiplying the number of points awarded to a pair by 100 and then dividing by the number of participants minus one.

Here are some real examples from games I have played on bridgebase.com. I’m playing South and my results are the ones highlighted.

In this example there were 10 playing pairs. We are playing NS. 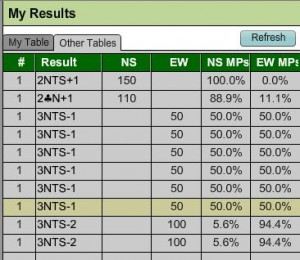 In this example the game was played 14 times. So the number of points awarded runs from 13 to 0. 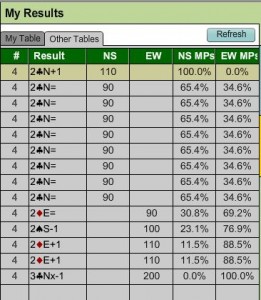 Now that you know how the percentage scores are worked out, join No Fear Bridge to work on improving your bridge bidding and play.  In no time your average percentages will rise and you will see how your play is improving.

US and Rest of the World players can join HERE.