Which Suit To Open 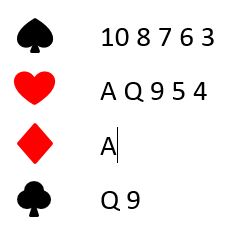 If you hold two five card suits, or even two six card suits, which suit should you open with?

The answer is that you should always open with the higher ranking suit (not the stronger hand).  The rank of the suit takes precedent over suit quality.  So, the example hand above should be opened with a spade bid not a heart bid.

Suppose you had opened 1

You don’t have 16+ points, so you wouldn’t be able to bid your spades as this would mean bidding a new suit above the barrier.  (The barrier here being hearts if you’d opened in hearts ).  If you did bid the spades this would tell your partner that you do have 16+ points.

However, if you open with the spades and partner replies with 1NT, 2C or 2D, there would be no problem rebidding 2H as your bid would be below the barrier.  (The barrier here being spades as you opened in spades.)

« Bidding A New Suit “Above The Barrier” » Bridge Cruises