Introduction to simple finessing in bridge

The most common form of finessing is leading a low card from one hand, hoping to win the trick with the high card in the other hand.  (You are playing declarer and dummy)

Imagine the cards in the suit you want to play are distributed like this: 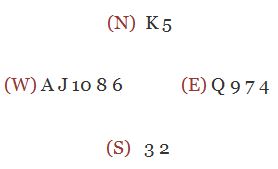 Can you make a trick with the king?

You can try finessing – this doesn’t guarantee that you will win the trick, as you don’t know the distribution of cards between West and East, but it gives you a chance of winning.

Finessing means leading a low card towards the honour card (or cards) that you hope to win with.

In the example above, you are South and North id dummy.  What do you think are your chances of making a trick with the Kind? If you finesse – lead a low card towards the King – you have a 50/50 chance of making the trick.

How does that work?

If East has the Ace your king can’t win as East will keep the Ace until you play the King.

However, if West has the Ace you will win.  You lead a low card towards the King.  If West plays the Ace, then you keep the King for another trick.  If West doesn’t play the Ace, then your King will win.  (I can hear you shouting – “what if West only has one card in that suit, the Ace – West will ruff the next trick”.  Every good rule has an exception.)

What will happen if you lead the King instead of finessing?  It will lose, because whoever has the Ace will play it and take the trick.